I have this rare chance to witness a model pageant last week, Sunday, 07-12-2015 . This time, I am not just simply the spectator, rather, a photographer (Oh! By the way, not the main event photographer but a photographer nonetheless). In fact, the reason I am present on that day, is because I acted as a ‘proxy’. Yes, officially, my beau supposedly is the one who will take photos. Due to some commitments, I went to the event on his behalf.

The event is held on Cinema 5, SM City Clark. I came to the place around quarter to 6:00 PM and met with fellow “photogs”, Arnold of AC Photography and Wayne Lapuz of Blackleeg Photography. The show starts at 6:00 PM and after the long lines of people waiting outside, we were ushered by the event organizer and the chairman, Tintin Guevarra, who also happened to be a batch mate of Arnold, inside after the crowds went in. Surprisingly though, instead on going straight on Cinema 5, we followed him and went to this small alley in between the Cinema 3 and 5. One of the perks of getting invited is to see the backstage and have a feel and look of what’s going on “backstage”.  Noticeable change is the plank placed in the middle, apparently serves as the catwalk.

Arnold and Wayne immediately choose the right place to take good shots. I merely followed them as I really have a vague idea and admittedly nervous on that day. So much for being an amateur photographer I am. Kudos to the 2 guys who assisted me throughout the event. Anyhow, Wayne and I managed to position ourselves in the middle, just in front of the catwalk. I still encountered difficulties in taking my shots in the so-called “angle of elevation”. You might probably imagined doing shots focused above your eye level.

As the event continues, below are the photos I have taken on the first part where models march the catwalk stating their names and locations. If there are candidates whose pictures do not appear, I sincerely apologize. I might be adjusting dslr’s settings or missed the right timing of the models: 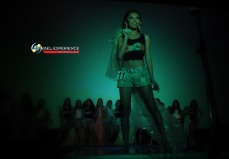 Rainy wear is the second part of the show and I have somehow capture these photos: (To be uploaded)

Next scene showcased City wear: (To be uploaded)

Before the contenders’ Rave wear, model kiddos awes us in their modelling skills. Tell me when these kids learn how walk like a model? (To be uploaded)

Models turned on their Rave wear and I must say my favorite part of the show. I actually considered it as one of the highlights of the said event. (To be uploaded)

A glimpse of the last cycle’s winners before heading on the awarding part:  (To be uploaded)

Finalists’ catwalk below: (To be uploaded)
Special awardees and winners below: