Hobbifest 2014 seems to be an outside Metro Manila event to look forward especially for cosplay fanatics. The most probable reason that the event had a large number of cosplayers and event goers is that the venue is accessible both from the North and Metro Manila along North Luzon Expressway (NLEX). Plus, the event organizers offered a free ride (selectively) from Robinson’s Galleria.

It is also my first attendance to a cosplay event for the year 2014. With this event, I thought of bringing my kid, Asher to show him what I do and for his first experience on such events.

With Bryan Cruz, we arrived at the Robinson’s Starmills, Pampanga at around 10:30 AM, 05-10-2014. Parking is always plenty and free. We saw only about 4 cosplayers at the moment. I took photos of the venue while waiting: 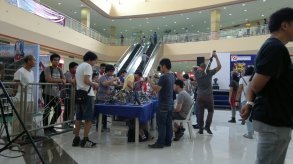 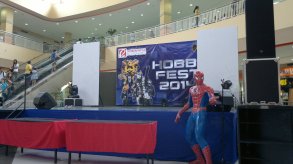 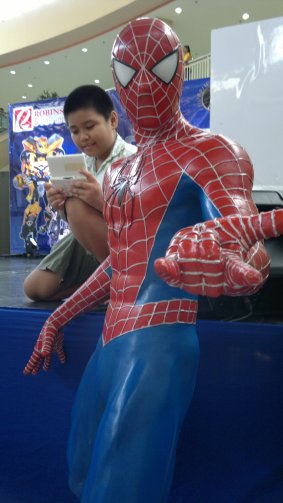 Asher kept on thinking what poses he would do. On Spiderman, he intentionally used the Nintendo DS as props and for Superman, he was actually trying to tickle him.

I also took an overview of the venue:

Tables and chairs were meant for the merchandisers and exhibitors

Took photos on some of their exhibits: 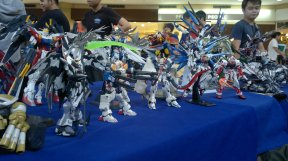 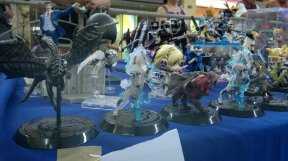 There were some merchandizes that cost as low as P50.00 which I did not expect not to have a chance to take photos of them at a later time.

We decided to ate lunch after taking photos of all potential prospects. As we go back at around 1:00 PM, the venue became crowded. Bryan and I concluded that the cosplayers and people decided to eat lunch before attending the event which we highly suggest especially if you are nearby.

I also met the following people:

Photos of the Cosplayers are uploaded on our facebook page:

There were more than 50 cosplayers participated on the event.

At first, Asher was posing on some photos but he was too shy to have photos with the cosplayers. I asked him to take photos with my backup camera. He was able to take some even though the camera was faulty: